Thomas Jefferson is most commonly known as the third president of the United States. His legacy includes writing the Declaration of Independence and being a founding father. However, most people don’t know that he was also a proponent of Stoicism and Epicureanism. Jefferson studied Greek philosophy to learn from some of history’s most influential minds, and his personal library held copies of works by Plato, Seneca, Cicero, Epictetus, and Marcus Aurelius. However, there are texts where he explained that he is an Epicurean. So, is Thomas Jefferson a Stoic or an Epicurean?

Thomas Jefferson is not a Stoic. Instead, he believes more in Epicureanism. This is apparent in his letter to William Short stating that he is an Epicurean. However, Thomas Jefferson appreciates and follows some Stoic principles, such as not letting emotion control his thoughts and actions.

This blog post will discuss Thomas Jefferson’s ideals while comparing them to Stoicism, Epicureanism, and Hedonism. Then, we will check his quotes and find out his beliefs. Lastly, we will combine all of this to come out with a conclusion.

Was Thomas Jefferson a Stoic?

While Thomas Jefferson isn’t a Stoic, he followed and praised some Stoic principles. This is apparent when he gives some advice to people around him.

Furthermore, like Theodore Roosevelt, Thomas Jefferson seems to have followed and studied Stoicism.

In one of his writings, Thomas Jefferson specifically said that “When angry, count ten, before you speak; if very angry, a hundred.”

This principle is well known in Stoicism as Stoics tend to stay away from passion.

The Stoics believe that too much emotion can cause irrationality. That’s why to be rational and be virtuous. We need to learn how to react appropriately to emotions.

The Stoics call too much emotion passion, and their primary way of reacting appropriately to passion is to pause when they feel they’re being subjected to it.

For example, when receiving a piece of bad news, we can lash out at everyone around us and ruin our day or pause and let it cool down before deciding what to do.

As you can see, there is a big difference between deciding when we are subjected to emotion and subjected to logic.

Another example is when we experience a breakup. Heartbreaks can fill us with emotions to do things we don’t usually do, such as being hard on ourselves or trying to calm down and look at it from a logical perspective.

By looking at a logical perspective, we can analyze the problem and develop a solution.

Thomas Jefferson’s way of staying away from passion is by counting. That’s why he said that we should count to ten or even a hundred when angry. This can cause us to calm down and handle things logically rather than emotionally.

But that’s not everything he follows from Stoicism.

It is also apparent that Thomas Jefferson believes in living a virtuous life to achieve happiness.

The Stoics believe that living a virtuous life is the key to achieving eudaimonia or what they call a happy life. By living in virtue, we will have a clear conscience and a peaceful life.

This is apparent when he said that “virtue is the foundation of happiness.”

The Stoics believe in the importance of virtues, particularly the 4 Stoic virtues. Those virtues are courage, wisdom, temperance, and justice.

That’s why when a Stoic does things, they make sure that everything they do is wise, courageous, away from temptations, and just.

Since Stoicism is a value centred philosophy, Thomas Jefferson might have got this idea from old Stoic texts he also studied.

As we can see, while Thomas Jefferson is not a Stoic, he appreciated some Stoic thoughts. In fact, he used these thoughts in his life and while advising others.

Thomas Jefferson is more of an Epicurean which we will discuss in the next section.

Was Thomas Jefferson an Epicurean?

Thomas Jefferson is an Epicurean because he admitted it in 1819 with a letter to William Short. Furthermore, he has numerous texts praising Epicurus, who is the founder of Epicureanism. Lastly, he said that happiness is the aim of life which is one of the main principles of Epicureanism.

Thomas Jefferson believed more in Epicureanism, as seen in his texts. This is also apparent that even if he praises Epictetus, he believes more in Epicurus’ thoughts.

To give a perspective, Epictetus is a Stoic philosopher who he acknowledged and referred to as the good of the Stoics.

On the other hand, Epicurus is the founder of Epicureanism which, as he said in the quote, explains and contains everything rational in moral philosophy.

Furthermore, in 1819, he specifically states that he is an Epicurean from his letter to William Short.

Epicureanism is a philosophy that focuses on gaining pleasure and staying away from pain or suffering. That’s why most people ask if he is a hedonist. That’s what we will talk about in the next section.

Was Thomas Jefferson a Hedonist?

Thomas Jefferson believes in Hedonism because he believes that happiness is the aim of life. This is apparent because he is an Epicurean, and Epicureanism is a philosophy mainly about seeking pleasure and getting rid of suffering.

While it is true that Thomas Jefferson is somewhat Hedonistic because he believes in Epicureanism, it is not true that he only focuses on seeking pleasure.

In fact, I think Thomas Jefferson is wise enough to study all these philosophies and use the ones that he finds useful.

That’s also why I think he followed Stoic principles, which also followed certain aspects of Epicureanism and Hedonism.

I don’t think there should be a problem finding whether he is a Stoic or an Epicurean. He followed both because he personally seeks what feels right.

That is also why Jefferson stated that while happiness is the aim of life, virtue is the foundation of happiness.

If we analyze this, he is saying that while the aim of life is happiness and pleasure following Epicureanism, he believes that virtues are essential as the foundation of happiness following the principles of Stoicism.

This means he followed both philosophies and chose what he believed was right. I’ve been looking at the concept of time management for years now and it has done a lot for me. I was able to do a lot of things with less time. Not only did I become more productive, but I also had time to pursue the things I love. Thus, I want to share… People correlate Stoicism as someone who always acts on logic and doesn’t emotionally connect with people. I can’t blame them since we frequently see Stoics on television as someone cold and distant. However, that’s the tip of the iceberg. While it is true that some Stoics tend to lack empathy, that’s not always the case… Stoicism teaches a lot of things about happiness. In fact, the most common reason why people try Stoicism is to be happier. However, how can an ancient philosophy made 2,000 years ago be applicable in our modern world? So how do Stoics find happiness? The Stoics find happiness by making them enjoy and be grateful… One of the things that really changed my life for the better is actually trying self-reflection. Thus, I am really excited to write this post to share the benefits of self-reflection I’ve found both for myself and others. I have also included scientific papers to solidify the point. The main benefit of self-reflection is that… 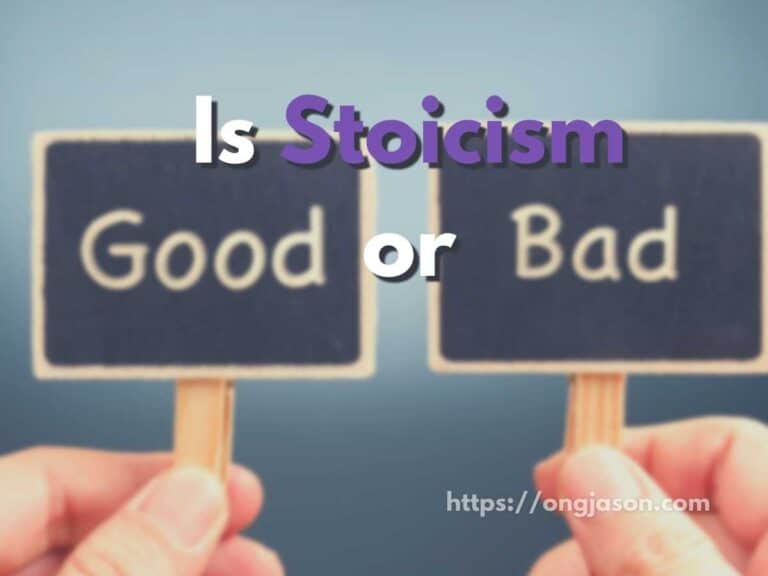 There have been many thoughts on Stoicism, especially if it is good or bad for us. For someone trying to follow the philosophy, it can be frustrating to follow something without fully knowing its advantages and disadvantages. Thus, I decided to give both the good and the bad of being Stoic. It is ok to… As someone who is inherently quiet, I often get questions about how do they talk with their friends and tell them that they are really quiet. I get the feeling that most introverts or quiet people like me are somewhat hard to talk to because they don’t know what we think. Since I am also…