When we search for Stoicism, one of the common notions is that Stoics are people who only rely on logic while rejecting emotions. However, that is wrong. Nevertheless, it is one of the common mistakes people see in Stoicism.

What are emotions for Stoics? To Stoics, emotions are an inevitable part of life. We would all feel different emotions in different circumstances, such as being happy, sad, courageous, fearful, and many more. Stoicism is all about accepting these emotions and properly reacting to them. That means Stoics are taught not to overreact to these emotions.

In this blog post, I am going to introduce you to the basics of Stoicism. I would not give any hard-to-understand concepts. Instead, we are going to see emotions from the basic Stoic standpoint. We are also going to see why people view Stoics as emotionless.

What do Stoics think about emotions?

Stoics think about emotions as an inevitable occurrence in life. In our daily lives, we will experience different emotions such as being happy, sad, and more. These emotions are things we can’t control in the sense that we would always feel them. Thus, Stoicism is about managing these emotions to achieve happiness.

We need to understand in Stoicism that Stoics are very keen on following the dichotomy of control.

The basic concept of the dichotomy of control is that there are many things in life that we can’t control.

Truthfully speaking, our emotions are deeper within our brain compared to our logical thinking.

This means it is close to impossible to remove our emotions since we will always experience them.

It is normal to feel happy when you have achieved something or sad if someone has a bad comment about you.

Since emotions usually occur in humans, it is not a good idea to suppress them.

Instead, Stoics understand that emotions are a part of life, and we should gladly accept them.

So, we already have that in mind. So, what do Stoics stay away from?

What Stoics stay away from is not emotions. Instead, they are staying away from passion.

For example, it is normal to be sad. However, if you lash out at your colleagues or loved ones because of your sadness, then that’s passion.

It’s normal to be frustrated, but going on a shopping spree to try forgetting about your sadness is not a good idea.

As you can see, emotions are bad if they hamper our logical thinking.

That’s why Stoics are also taught not to decide when they feel like they’re full of emotions.

This is simply because too much emotion can block our rational thinking.

Now, let’s talk more about the topic in the next section.

Do Stoics have no emotions?

Stoics have emotions. Emotions are something inevitable, and all humans experience them in their daily lives. Stoics look like someone who has no emotions because they know how to react and maintain their rationality despite these emotions.

I promised not to give you deep Stoic thinking, but this is the one necessary thing.

To Stoics, there is one thing called propatheiai.

Here’s what it means.

Propatheiai means involuntary reactions. If we look at it, emotions are automatic actions.

We will feel emotions depending on the situation. Emotions are involuntary. Thus, propatheiai.

For example, when you’re in the presence of heights, you might feel fear. The feeling of fear is an emotion.

Your business is failing; then you’ll feel fear which means your mind tells you to do something to solve it.

You had good grades in school? Then you’ll also feel emotions. This time, it is the feeling of happiness that something significant has happened to your life.

Since these emotions are involuntary, we all have them.

Regardless of what you are, you will have emotions.

This is the same for Stoics.

Emotions are something we can’t entirely suppress. That’s why Stoics should not be seen as someone who is emotionless.

But why do people see Stoics as being emotionless?

People see Stoics as emotionless because they know how to handle emotions, which makes them stay away from passion.

Because of this, people see them as someone without emotions.

But how do Stoics handle emotions? I’ll talk about that in the next section.

How to control emotions as a Stoic?

To handle emotions, you need to understand the two basic steps of managing emotions according to Stoicism.

To Stoics, emotions are only emotions. Therefore, how we react to these emotions is what matters.

Here is the difference.

It is easy for someone to lash out and shout at people around them suddenly when they are mad.

This is passion. Too much anger could cause you to act on something you’ll regret later on.

For Stoics they see anger as simply an emotion. We can’t control emotions. Instead, we can react to these emotions.

Instead of being mad at everybody because you’re in a bad mood, a Stoic would try to control how they react.

Instead of lashing out in anger, they would instead try to calm down.

More example is when a person feels fear, such as a big project coming. A Stoic would understand that if they could react to fear by running away, or they could handle fear with courage,

For other people who see Stoics as someone who can logically handle these emotions, it would look like someone is emotionless.

The truth is, they know how to react to emotions. That’s what Stoicism is.

Instead of running from fear, they would respond by being courageous.

Instead of being greedy for things, they know that how to react based on virtues.

Now, how do Stoics react appropriately to emotions? What makes them think the thing they’ll do will be the right one? Stoics know they’re doing the right thing by living according to their virtues. If you’re interested in the Stoic virtues, I covered the topic on another blog post. So here is the link: Does Stoicism make you emotionless? Yesterday, while I was writing my journal, the concept of freedom and Stoicism suddenly came to my mind. I realized that this was an exciting topic so, I decided to research and put my thoughts into it. I found many interesting things when it comes to Stoicism, freedom, and free will from the explanation of… 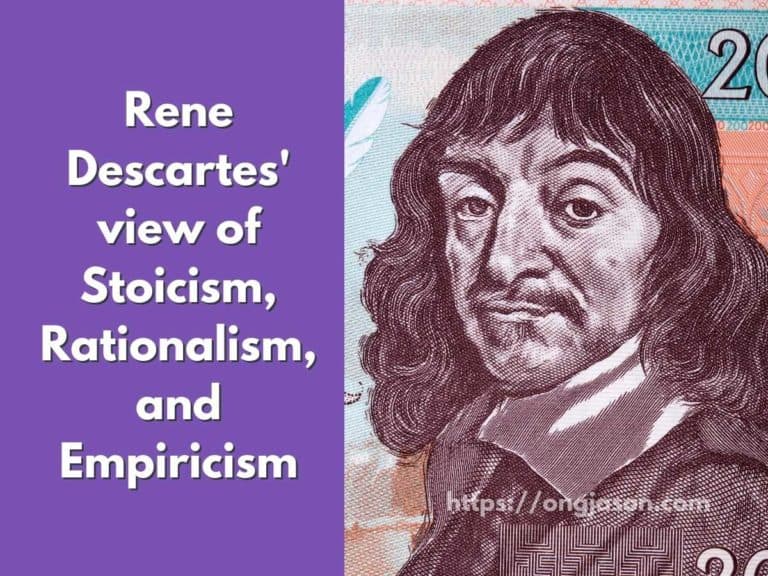 Rene Descartes was one of the key figures of philosophy. Descartes’ Stoicism philosophy stresses that an individual should act according to virtue, which includes patience and moderation. His Rationalism philosophy maintains that reality is composed of ideas and that the human mind has an innate capacity for understanding these ideas. So, what makes Descartes a… As I am staring at my laptop screen for quite some time, I felt the sense that I need a break. The problem is that I also know that it is really an act of laziness because I haven’t done anything today other than checking emails and staring at the screen waiting for the perfect… Stoics are known for being cold and emotionless. In fact, according to Meriam Webster, Stoic is defined as a person not affected by or showing passion or feeling. That’s why most people who’ve met or researched Stoic would usually ask themselves if stoics feel love. Stoics feel love because love is a universal emotion defined…